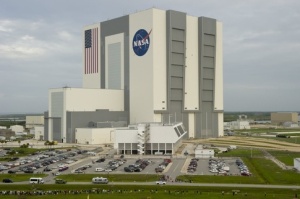 1.. The Vehicle Assembly Building (VAB) at NASA’s Kennedy Space Center in Florida is the world’s fourth largest building by volume. Completed in 1966, the VAB also holds the record of the largest one-story building in the world and the tallest building outside an urban center in the United States.
The VAB is so large, in fact, that it has its own weather. On humid days, rain clouds can form below the ceiling, requiring about 10,000 tons of air conditioning equipment to control the moisture. With this setup, the total volume of air in the building can be replaced in only one hour.
Source and more information

2. When a male bee climaxes, their testicles explode then they die.
Strange as it is, this actually makes evolutionary sense: the snapped-off penis acts as a genital plug to prevent other drones from fertilizing the queen. Isn’t nature amazing!
source 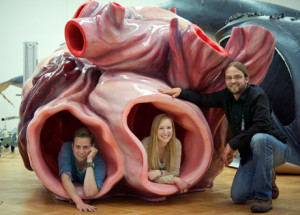 3. The blue whale is a massive creature and is the largest living animal in the world; even larger than most dinosaurs.
The largest of the blue whales can measure in at over 100 ft in length and can weigh in excess of 180 tons at its largest.
In fact everything about the blue whale is large including its, arteries and its heart.
On average most blue whales grow to be around 70 – 90 ft in length, weigh around 100 – 150 tons.
In order to get blood through the blue whales large body it has massive arteries, which pump blood through the heart and into its major vital organs.
The arteries are so large in fact that a full size human could swim through them.
The aorta alone measures in at over 9 inches!
The blue whales heart can weigh in excess of 1,300 lbs.
In terms of size the blue whales heart is about the size of a small car.
At a rate of 8 – 10 beats per minute the blue whale’s heartbeat can be heard from over 2 miles away.
source

4. Hydrogen is a light, odorless gas, which, given enough time, turns into people.
Interesting concept: – Edward R. Harrison, a cosmologist at the University of Massachusetts, Amherst. He writes in the Quarterly Journal of the Royal Astronomical Society that yes, our universe may well have been created by intelligent beings in another universe. That assertion does nothing to explain how the whole thing began. It just moves the question back a step: Where did the universe inhabited by those intelligent beings come from? But Harrison’s idea would explain some very strange things about our universe, such as how exactly right for life it is.

The history of the Universe has been summed up thusly: “Hydrogen is a light, odorless gas, which, given enough time, turns into people.” When our universe began, it consisted mostly of hydrogen. That gas condensed into galaxies of stars, in whose cores heat and pressure fused atoms into heavier elements, including those necessary for life. Some of those stars exploded, spewing the heavier elements out into space. New stars and planets formed, including our own. On one of those planets, life appeared. Harrison contends that none of it could have happened unless all the physical constants (the speed of light, the charge and mass of the electron, and similar numbers) were just right. Reviewing the work of a long line of cosmologists, Harrison sums up what has come to be known as the Anthropic Principle: the Universe is the way it is because we exist. He explains: “In a universe containing luminous stars and chemical elements essential for the existence of organic life, the physical constants are necessarily precisely adjusted (or finely tuned). Slight deviations from the observed values could result in a starless and lifeless universe.”
More information for those interested

5. Humans rode bareback or mounted horses with a simple blanket after they first domesticated the animals, thousands of years after the dawn of agriculture. The leather saddle first straddled a horse’s back in China perhaps as far back as the third century B.C. But the saddle was only one step toward transforming the use of cavalry as a means of waging war. Climbing onto a horse while bearing weapons had long presented its own precarious hazards. Cambyses II, a Persian king in the sixth century B.C., died after stabbing himself as he vaulted onto a horse.
The stirrup – such an important innovation was that it allowed the rider immensely greater control in horsemanship: rider and animal became almost extensions of each other. It was possible to shoot arrows accurately while the horse dashed ahead at full gallop. A cavalryman could brace himself in the saddle and, with a lance positioned under his arm, use the tremendous force of the charging horse to strike a stunned enemy. The horse’s sheer mass and quickness became an implement of the cavalry’s weaponry—and a powerful intimidation factor.
More info