This was sent by my Greeny friend Julie from NZ 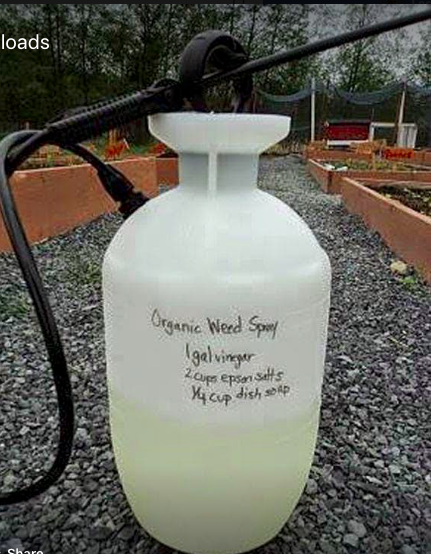 In 1934 Bobby Jones requested the USGA to host the US Open at Augusta. USGA said no.

Angry at the rebuff. Bobby Jones and Clifford Roberts decided to have there own event, which

became the Masters. The Masters is not a Championship of anything.

“You are the winner of the Masters”.

The Masters is one of the most unusual events in sports.

It’s all about tradition, and it’s defined by a set of odd rules and customs that just don’t exist outside of Augusta National. It’s great.

We compiled the oddest traditions that make the Masters and Augusta one of a kind. 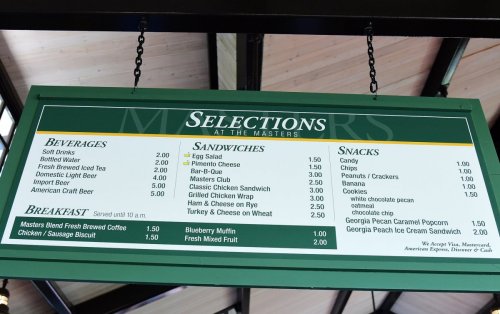 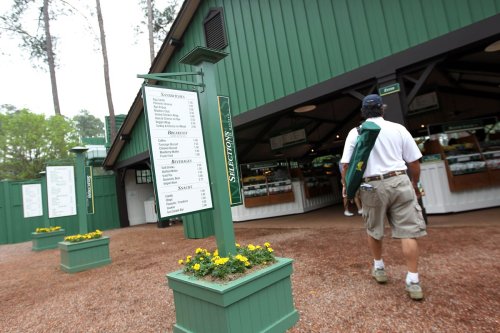 Cell phones are prohibited at all times and cameras are not permitted during the tournament.

It’s one of the only places in the U.S. where there are long lines for pay phones. 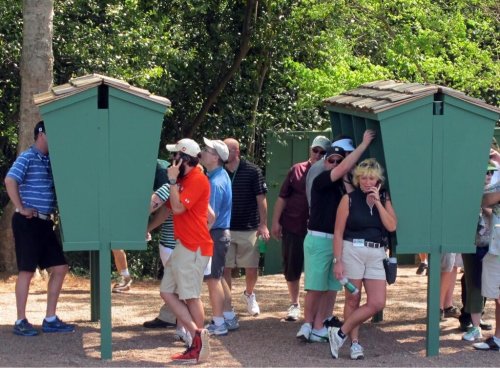 There’s a huge fence around the course to keep out animals. There has been one deer sighting in the last 65 years.

Only four minutes of commercials per hour are allowed during the broadcast and no blimps are allowed.

TV commentators are not allowed to refer to fans as “fans” or “spectators” They are to be called “patrons,” and the rough is to be referred to as the “second cut.” 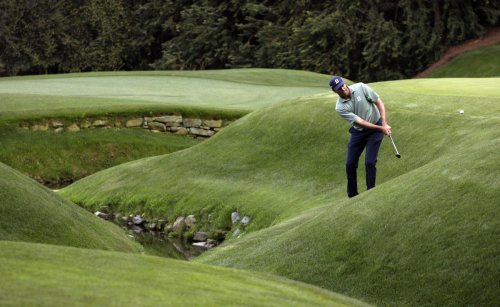 The Masters banned CBS broadcaster Gary McCord in 1995 for saying, “They don’t cut the greens here at Augusta, they use bikini wax.”

Players had to use local caddies provided by Augusta until 1983. 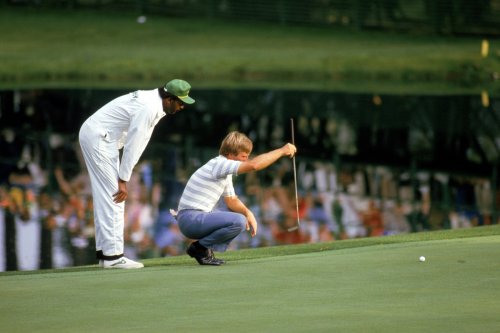 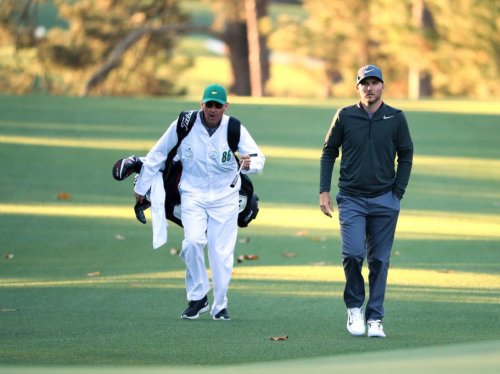 Players are allowed to use their own caddies now, but they have to wear the Augusta uniform — green hat, white jumpsuit.

Like many golf courses, there is good fishing at Augusta National, but the players don’t like to talk about it because it is forbidden.

In 2011, Monte Burke of Forbes interviewed golfers about the best
fishing spots on the PGA Tour.

When Augusta was brought up, he described their responses as “squeamish” and they only admitted to hearing there were some good spots.

A former caddie was willing to tell Burke that the best spots are the creek in front of the 12th hole (“full of bream”; seen above)and the pond at the 16th hole (“brimming with bass”).

Patrons can bring collapsible chairs to sit on, but those chairs are not allowed to have armrests. 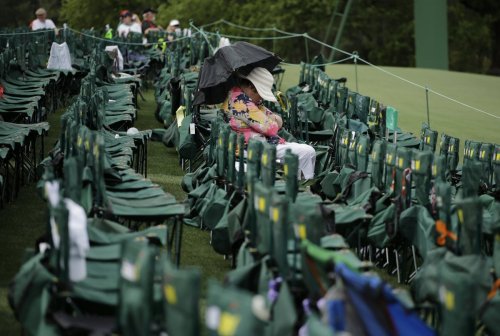 Running is not allowed, unless you are a player. 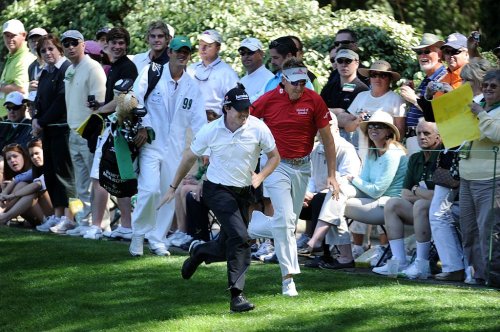 There is a house located in the middle of the Augusta National parking lot because the owners refuse to sell it. The family has reportedly turned down “millions.”

You can’t apply to become a member at Augusta.

It’s nearly impossible to become a member at Augusta. You have to be nominated  by a current Augusta member, and new  initiations generally aren’t accepted unless  someone quits or dies. The total membership hovers around 300. 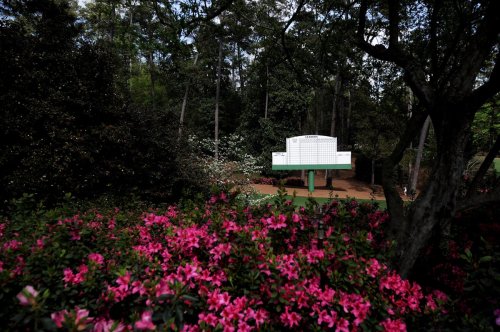 Augusta is closed in the summer to keep the course in pristine shape.

Players are given a brand new Mercedes for use during the week.

Golf cart drivers who are hired to drive the players around Augusta National also pick up the golfers at the airport in the Mercedes they will be using. The cars also have a number in the back window so that employees can always identify the players by which car they are in.

You can go to jail for selling tickets.

Twenty-four people were arrested outside Augusta in 2012 for trying to scalp tickets.

The course is insane about who it lets into the tournament and it’s illegal to sell tickets within 2,700 feet of the gates.

You can only ask for autographs in one part of the course.

Fans always line the ropes at big tournaments in hopes of getting a signature. But this is tougher to do at Augusta.

You can only try and solicit an autograph on the Washington Road side of the clubhouse, near the practice facilities.

The bunkers at Augusta are filled with mining waste. 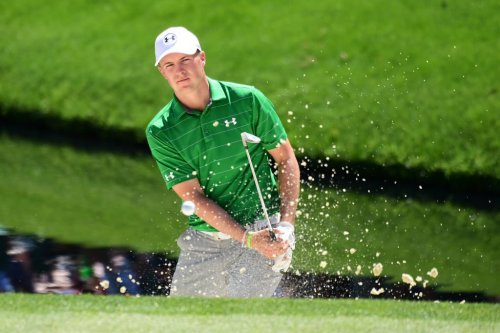 You know those pristine white bunkers?

They’re actually  composed of waste product from the mining of aluminum, according to Golf.com

Basically, there’s this company that mines feldspar (rocks) for aluminum.

This process produces waste in the form of really bright, pure quartz —

The course used cows as lawnmowers in the 1940s.

A close-up picture of the fairways at Augusta .

But WWII affected Augusta just like it did the rest of the country.

During  the war, Augusta didn’t have the manpower to maintain the

course, so they set 200 cattle loose on the grounds in hopes that they would “trim”  the grass by eating it.
Keith

Found this article on Dr Axe’s site and found it really interesting so thought you may also. Suzanne Kelly has written a book on the subject that you also may like to read called  “Greening Death,”

Fear of the decomposing corpse reached a fever pitch, and cities and towns passed laws banning human burials within their borders. This marked the beginning of sanitizing death and the beginning of a funeral industry that today rakes in $16 billion annually in the U.S. alone. But we’re starting to see a backlash to these modern-day burial methods as the idea of green burial is gaining momentum in the United States once again.

What is a green burial service?

Also known as “natural burial,” the Green Burial Council describes a green burial as something that.

Basically it is returning the body back to the earth in its natural form to decompose naturally with bugs and all that stuff.

The main features of today’s green burials include using:

The Green Burial Council differ in their requirements for some areas so check it out and make sure a potential site matches your wants and needs. (For instance, some are certified to remain a preserve in perpetuity, while others aren’t.)

Is it legal to have a natural burial?

Click here To find out more on this subject

1. What Brassica vegetables are:

These vegetables rank among the top 10 healthiest and give you the most folate which is a B vitamin which is naturally present in these vegetables and an important vitamin for pregnant woman. However a study of 1391 women released in May 2016 revealed that excessive amounts of folate may increase the risk for autism.
So the old saying “Everything in moderation” is very relevant with this vitamin.
Source Nature and Health

2. In a study of 512,891 adults, published in the New England Journal of Medicine, those who ate fresh fruit daily had a 40 percent lower risk of dying from cardiovascular disease.

3. If you stop eating by 6pm till 8am the next day you will help to reduce the risk of  Alzheimer’s dramatically plus lose a bit of weight around the waist as well.
That 14 hours of fasting will put the brain in resting mode and reduce the brain from aging.
Another benefit is to be drinking green tea and increase your consumption of eggs which helps to build a healthy brain.
Source 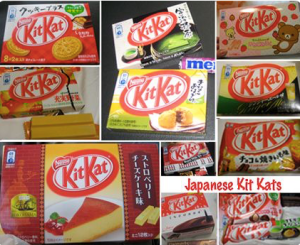 4. Japan’s population  consumes up to 5 million kit Kat bars every day.
Not the original chocolate variety, they have a choice of strawberry, cheese Cake, green tea, sweet potato , red bean sandwich and sake and there is more:- 300 flavors in fact.
In my opinion a great way to ruin a Kit Kat bar.
Source

5. Lyndon B Johnson had a car that could go in and out of the water. He would scare his passengers by driving into the lake shouting”The brakes won’t hold we are going to go under”.  The Amphicar had a  Texas REG. Number TX1919-AZ 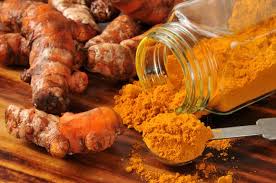 Aluminum can destroy the endocrine system and lead to widespread hormonal imbalance (especially when it’s absorbed through the lymph system) if it accumulates beyond a certain level. It’s even been linked with breast cancer, prostate cancer, and Alzheimer’s disease.

Turmeric’s anti-inflammatory and antioxidant activities are well-known. By neutralizing both chronic inflammation and oxidative stress—two of the greatest inhibitors of the body’s natural detoxification functions—turmeric helps protect against the negative effects of aluminum and other heavy metals. 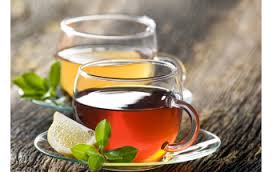 3. Legend has it that tea was discovered accidentally. About  5,000 years ago when the Chinese Emperor witnessed leaves blow from a near by bush into a pot of  boiling water.

Anyway both Black and Green tea prevent the breakdown of Acetylcholine a chemical found to be lacking in the brain of those with Alzhiemer’s disease. Green tea is found to contain l-theanine an amino acid which increases the activity of dopamine and the alpha waves of the brain. 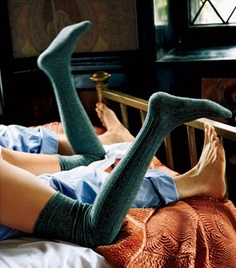 4. Warm feet.   They say that 30% of woman’s likelihood of achieving orgasm will be if her feet are warm. This is information from researchers from the Netherlands. So go buy some fancy bedsocks guys .

5. Keep a potted ‘Peace Lily’ on your desk. A NASA study showed this plant was the most effective at removing airborne toxins especially in the office to ward of all those office place germs. Interesting I thought.

I love the look of these practical wallets. I have a similar type wallet for my cards but it is deteriorating fast with use because it is plastic.  This is a simple system, good material, and compact. It allows you to avail yourself to the cards you use most each day and store the rest in another compartment so that you are not fumbling though heaps of cards to find the one you want.

I think it’s a great practical gift idea. Something different and of good use.

The video below is an example of how the wallet works.

2. Here is another gift idea.

Herbs and spices I am always looking for, also good quality aromatherapy oils and gadgets plus good quality green tea and I have found this company ideal.
At this stage they don’t have gift packaging but you can do that yourself. If you have someone who likes these sorts of products then they will make excellent gifts and quality ones from this company.

Just click here or  on the banner and it will take you to the site to look around. 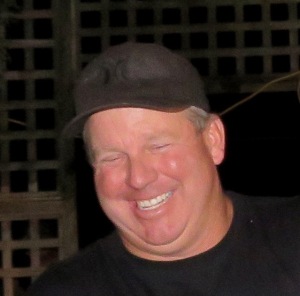 You are All the colors of the Rainbow
Author:- Me his Mom

The yellow of the rainbow is the light of the sun
He was born with strength, a smile, his life just begun

The blue of the rainbow is that so true
He was born loyal, impressive to those who knew

The green of the rainbow is natures beauty
He was born with the love of water, to enjoy is his duty

The many other colors of the rainbow to me is love
This kid is an honor, now a man of 43, who I respect, a gift from above

Happy birthday Jamin, you are special because I say-so
You make me proud because to me you are all the colors of the rainbow

That Ever Popular Green Drink

How easy are these and so quick. You can even give them to the kids for their lunch boxes. And what’s even better you can freeze for later use.

-Preheat oven at 200 C
-Grease your mini muffin tin
-Add vegetables of your choice along with cheese (if you choose), pour beaten egg mixture on it.
-Place muffin pan on the center rack of a preheated oven and bake for 20-25 minutes or until muffins are light brown, puffy, and the eggs are set.
-Let muffins cool for a few minutes before removing from the muffin pan or cups. Loosen gently with knife if they seem to be sticking. Eat immediately or let cool completely and store in plastic bag in refrigerator or freezer. The Egg Muffins can be reheated in the microwave.