A Message From Christchurch

This was an email that was sent to a friend of mine who lives in Australia. I thought I would share this with you to give you some idea of how terrifying this earthquake has been

This email is from Vicky Montgomery a lawyer friend of mine who has just moved back to NZ and living in Christchurch, after 10 years overseas

Well, it has been another terrible day, but we are okay so far. The house is still standing – how it is possible I don’t quite know, but it is, although we have a whole lot more new cracks and swinging open or stuck doors and I guess some damage of which we are not even aware yet. I was sitting at the dining room table sending off some emails when the train smacked into the side of the house without any warning (often the smaller shakes and jolts are preceded by a kind of rumble so you know that something is coming), but not this time. The house started lurching so badly all I could do was hang onto the table for dear life, and listen to the huge roaring
noise of the thing as well as seeing the doors of the big cabinet thing on the wall of the dining room thrown open and spew out about two dozen antique glasses/carafes and other delicate things all of which I had been collecting for years or had inherited and was rather fond of. When it was ‘over’, the floor was completely strewn with glass and I was completely freaked – my heart was pounding and I was shaking like a leaf. We had a whole series of after-shocks almost immediately after and several of those were pretty damn scary as well. The after-shocks are continuing and will do for some time. Each time one comes I think ”
is it going to get bigger “, and I’m scared of the house falling down on us – even as I write this, there has been about 4 or 5 – about a minute apart. Now that it is dark, it seems worse.

At least we still have a roof over our heads and so far we are okay, unlike so may others. After about 7 hours, the power has come back on, so we have some lights and a cup of tea and the internet up and running again. There are a lot of planes and helicopters overhead and an awful lot of people are out in parks and other open spaces because they can’t get back into their homes or accommodation. It is raining and cold, and at least we are indoors, but for those who are not I feel as if I should be out doing something – but it’s hard to know what. I haven’t even got enough food in the house to make some soup or something and it wouldn’t be enough. Even if we offered people a bed for the night, they would probably feel safer staying up all night, given the severity and frequency of the aftershocks – I mean how can anyone sleep in this? I think it will be a night of dozing on the couch – fully clothed, luckily we have a couple of bottles of wine that survived – better get them down my throat quickly!!!
Thank you all for your kind thoughts and lovely messages – greatly appreciated. Whew, what a day. xxx V

"The New Zealand earthquake broke an iceberg the area of 20 football fields off the country's longest glacier. 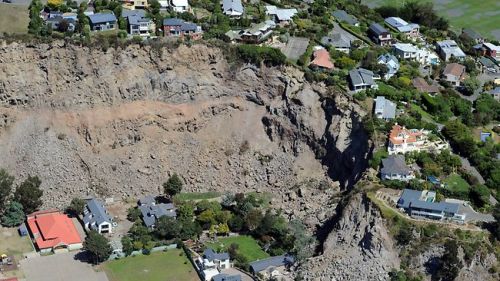 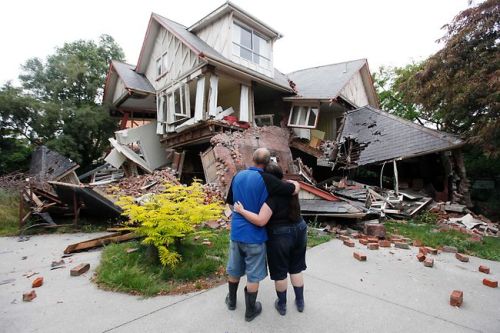