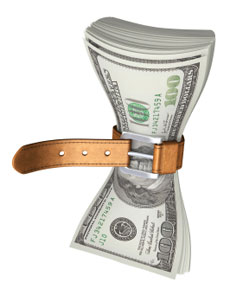 Americans continue to tighten their belts, saving more and paying off what they owe, though many are falling behind on their mortgages, according to the latest Equifax Credit Trends report, released Tuesday. In the meantime, banks are making it more difficult to get a loan.

The report, based on data gleaned from more than 200 million files of U.S. consumers using credit, found that total consumer debt has been reduced by more than $440 billion. That’s down 3.8 percent from its peak in the third quarter of last year.

“American consumers are making the most fundamental change in the way they handle their finances we have seen in a decade,” said Dann Adams, president of Equifax’s U.S. Consumer Information System, in a news release. “They are conserving cash and reducing debt across the board. We haven’t seen savings rates this high since shortly after the third quarter of 2001 – just after 9/11 – when they were at 3.25 percent.”

Since September 2008, there are 88 million fewer credit card accounts, and credit lines have been reduced by $751 billion. However, delinquency rates are the highest they have been in five years, with 4.36 percent of bankcard accounts more than 60 days late in September, up from 3.39 percent a year ago and 2.8 percent in September 2007.

For the first nine months of 2009, personal bankruptcy filings were 40 percent higher than last year. Filings have already exceeded 1 million, while there were 1.1 million filings in all of 2008.

“The data reflect an economy in transition, with consumers doing better with their financial management, but with many still struggling in the face of high unemployment and restricted credit,” Adams said.